Our main hurdle is to overcome the common belief that putting is a purely mechanical skill. Yes, mechanics are involved, but we move the putterhead only a matter of feet, or inches—it’s a desperately simple movement. But the simplicity is our main problem. It tempts us to believe that if we could only find the perfect combination of grip, stance, swing, and putter, we’d rid ourselves of all our putting woes.

But most of us still have plenty of woes, so there’s clearly something missing. Unfortunately, by focusing on mechanics, we ignore the real core of expert putting—motor control. Motor control simply means using the brain to control the body. The key point is that an expert putting stroke isn’t just a mechanical movement, it’s a complex skill that combines mechanics with the mental processes that control them.
We can think of the putting stroke as a combination of four key elements:

If we want to become expert putters, we need to develop all four links in this biological chain.

'Simply said, this is easily one of the best books on putting improvement that has been written. Practical useful information that golfers can use to putt well.'

The science behind the stroke

'Has made a huge difference in my putting.'

'After reading dozens of books on the swing I found Chris's book and loved it. It is fantastic at integrating a wide range of varying concepts on putting in a very modern approach.'

A change of focus

Key elements of the putting stroke

We hit bad putts with our brains. We may think we made a physical error, but in reality, we programmed the miss into our brain well before we even started the stroke. We did it - by thinking and looking incorrectly.

To take control of our putting stroke, we need to ignore complex putting mechanics and theories, and focus on our innate, instinctive movement control systems: judgement, visualisation, imagery, and thoughts.

This page provides an overview of the modern science that underlies the skill of putting. Below, you'll find a summary of the main problems we face on the putting green, and ways of ensuring that we always make our best putting stroke. The ball won't always fall into the hole - we can't control that - but it will go consistently closer. The important thing is that we always make our best stroke - we can control that.

'Phenomenal putting book! This book teaches how to get into the right brain-state, use your eyes properly and most importantly not waste time correcting technique and thinking about mechanics.'

All expert performers have performance routines. They practice the routine as much as they practice the skill, because a high-level skill can’t happen without the right mental and physical preparation. In putting, an effective routine is:

This simple routine fulfills all the scientific requirements of a good putting stroke. And before you ask - yes, the final smile is just as important as the other bits....

Note that the routine is almost completely mental. Even the act of making the stroke itself isn’t a conscious effort—it’s an automatic, instinctive movement that takes care of itself. So when we read that putting is 90% mental—it’s not exactly true. It's closer to 100%!

'I dropped 4 shots off my handicap in as many weeks after reading both of Chris's books, (and practising). Made a huge difference in my putting.' 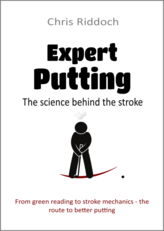 There’s a well-developed science of getting the ball into the hole, which is a combination of maths, physics, biomechanics, geometry, psychology and neuroscience. This sounds complicated, but really, it isn’t. We can apply the science to our putting strokes through some simple practices. In other words, there’s nothing to stop any of us becoming an expert putter. There’s no secret, no complicated movements, and no new theories - just the simple science of how putting ‘works’. We just need to realise that putting is a brain problem, not a body problem.

'Genius! I have read over 100 golf books and by far this book is the best.'

We normally have around 30 seconds to judge, prepare and make a putting stroke. Professionals take longer, but we can’t. During this time, we need to judge speed and line, imagine a putt that will find the hole, create a motor plan in our brains, adopt a good swing thought, and perform a mechanically sound putting stroke. We need a simple, step-by-step putting routine that ensures we perform all four skills correctly, and at the right time. In scientific terms, the expert putting stroke includes the following skills: